Home Inter Bounces Back To Beat SPAL In Serie A 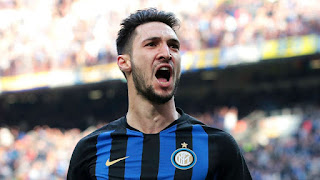 Inter Bounces Back To Beat Spal In Serie A, on Sunday and stay on course for a place in next season’s Champions League.
Lautaro Martinez thought he had given Inter the lead in the 32nd minute but the goal was disallowed when a VAR review showed that the Argentine had used his hand to control the ball.

Inter midfielder Marcelo Brozovic went off injured just before halftime and defender Miranda was substituted at the interval with a suspected broken nose.

But luck turned Inter’s way when Matteo Politano scored with a deflected shot in the 67th minute and Roberto Gagliardini diverted a Cedric Soares effort into the net for a similar goal 10 minutes later.

Inter are fourth with 50 points, six clear of AS Roma, Torino and Atalanta. The top four qualify for next season’s Champions League.

Juve Prepares For Atletico Battle With Udinese Warm Up

Juventus Lays One hand On Title After Squeezing past Napoli