Pressure on Bayern ahead of must-win title match Against BVB 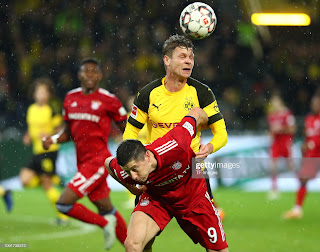 Pressure On Bayern Ahead of Must-Win Title Match Against BVB

Pressure On Bayern Ahead Of Must-win Title Match Vs BVB, Bayern Munich coach Niko Kovac has said that his bruised Bayern Munich team are determined to tilt the Bundesliga title race back in their favour with a win over Borussia Dortmund on Saturday.

Kovac’s side have endured a tough week in the build-up to their title race showdown with Dortmund at the Allianz Arena this weekend.

They slipped two points behind their rivals after being held to a draw in Freiburg last Saturday, and survived a scare against Heidenheim in a dramatic 5-4 cup win on Wednesday.

Club president Uli Hoeness has also heaped the pressure on Kovac and his players, saying that there can be “no excuses” in the “must-win” game against Dortmund.

On Thursday, Kovac insisted that his players were up for the fight.

“Dortmund are having a great season, and it will be an interesting and evenly-matched game,” he said.

“At the end of the day it will come down to who is better on the day. We want to win the game at all costs. The club, the fans, everyone wants to win the game.”

After they conceded four goals on Wednesday, Kovac said that his players had to show the right attitude against Dortmund.

“We need to start defending well again, as individuals and as a team. It’s a question of attitude,” he said.
Bayern will potentially be without several key players for the season-defining clash.

Arjen Robben and Alphonso Davies are both still injured, while David Alaba and Manuel Neuer did not train with the team on Thursday.
Kovac also admitted that striker Robert Lewandowski has been fighting off illness in the last few days.

Dortmund, meanwhile, have their own injury problems, and are hoping that Spanish striker Paco Alcacer, who scored twice in last week’s win over Wolfsburg, will be fit for Saturday.

They will be relieved to welcome back captain Marco Reus, however, who missed the Wolfsburg game to be at the birth of his first child.

Dortmund midfielder and former Bayern star Mario Goetze warned his teammates that they would need to be at the top of their game if they were to beat Bayern.

“It will be important to play at our top level for 90 or 95 minutes, because little things will decide the game,” said Goetze.

“We need to be brave and clever going forward.”

If Dortmund were to win, it would be their first league victory in Munich since 2014.

It would also see them establish a five-point lead at the top of the table.

Yet the Dortmund hierarchy warned that even a win would not decide the title race in their favour.

“Of course the game is a little bit special, but there are seven games to go,” said coach Lucien Favre.

“We are looking forward to the game and know what the situation is,” he said.

“But that doesn’t mean we need to do a triple somersault.”

England to learn from previous mistake after Kosovo match – Southgate